...or what do I do now?
Besides being available in casino gift shops, “Basic Strategy” cards/charts can be found on the Internet. (Here is one we found.)
Some charts can be slightly different because some casinos allow doubling on any two cards, while others restrict doubling to the Nine, Ten or Ace ...or just the Ten and Ace.
There can also be restrictions on doubling after a split and whether or not surrender is offered. Most cards/charts assume doubling on any two cards or after a split ...but no surrender.
(Note: H/P and H/R = Split or Surrender if allowed - otherwise Hit. Some rules below may confict with this chart.)
Here is a recap of what most (but not all) charts say...or what a player should do if the total of your first two cards equals:
“Hard” Hand totals:“Soft” Hand totals: (A soft hand always includes an Ace.)Matching pairs:The six basic strategy rules for splitting:Rules for standing with a hard hand:A final word about strategy
Play Blackjack in a casino with good Blackjack rules. This means that you can double after split, double on any two cards, and split pairs up to four times, and that the dealer doesn't hit on soft 17.
If nothing else, remember these seven simple rules:

Want to learn more about blackjack? A good website is BlackjackInfo .com. They have Basic Strategy charts that can be customized, some free blackjack games you can play ...even a trainer that warns you if you make plays that are not perfect Basic Strategy. Another Basic Strategy trainer is located here. Try it out!
Card counting
Card counting is discouraged by casinos, because (while not illegal) keeping track of high and low cards played gives the player an edge. Playing basic strategy correctly gives the player a pretty much even chance to win. All you need to know is that cards with values of Deuce thru Six generally are poor cards and there are nearly 40% of them. Ten-count cards and Aces are the most favorable, also about 40% of them. Keeping track of them in a constantly shuffled six to eight deck “shoe” game is just about impossible ...so forget about “counting.” The main thing to remember is that if a dealer has a Deuce thru Six, the chances of a player winning (and the dealer losing) are good. Conversely, if a dealer has a high card showing, the chances are the player will lose.
A word about “comps”

Present your players card to the pit boss for rating every time you sit down at a Blackjack table. You might increase your bet when the pit boss is watching. It will improve your chances of getting “comps” ...free stuff. A “comp” (as in “complimentary”) is a perk given by the casino. The purpose of “comping” is two-fold ...to build customer loyalty and to activate your name in the casino’s database for marketing purposes. Frankly, we are not a big fan of playing just to get comps.Realistically, unless you bet a minimum of $25 a hand, most casinos are generally not interested in giving you “free stuff.” The Blackjack “comps” formula is generally based on an average of one Blackjack hand a minute (60 hands an hour) times $25 (or $1,500 wagered) times 2% (their profit ...$30). For “comp” purposes your share is 40% (or $12 per hour.) And that’s if you play $25 on every hand.
If you do, you might ask to meet the casino host after 3 or 4 hours of play. Inquire about free rooms, shows, upgrades, meals.... It never hurts to try. The worst thing that could happen is that the host will say “No.” And you might get offered something else instead.
One thing you should never lose sight of. That is, anything you get free from a casino is not really free. The “freebie” is almost always based on your theoretical loss ...and the casino’s profit. You get it because the casino wants you to keep coming back so they can make more money off of you.
A better idea might be to just bet the table minimum as long as possible. You have a good chance of winning if you are lucky and play perfect, basic strategy at all times. The house advantage against a Blackjack strategy player is about one-half of one percent. That's as good as it gets in a casino. 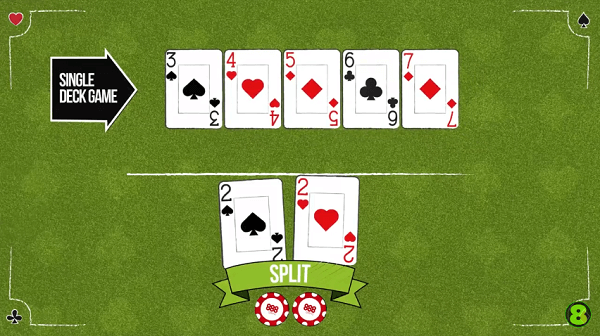 Why You Split a Pair of Aces or Eights

By Arnold Snyder
(First published in Player Magazine)
© 2005 Arnold Snyder
Aces and eights.
Poker players know this as the 'Dead Man's Hand.' Legend tells us that these are the cards Wild Bill Hickok was holding when he was shot down at a poker table in Deadwood, South Dakota, back in 1876.
To basic strategy blackjack players aces and eights have entirely different meanings. The common wisdom spouted by experienced players, dealers and pit bosses, is: 'Always split aces and eights.'
Virtually all players would agree that splitting aces makes sense as blackjack basic strategy. Who wouldn't trade one hand starting with a total of 12, for two hands starting with 11 each? Only a moron would keep the 12.
But eights?
Sure, it makes sense to split those eights in two when the dealer is showing a potential bust card. Who wants a blackjack hand totaling 16? No one. Ever. So if the dealer's got a five up, or a deuce, or any other pitiful low card, I'd rather take my chances with two hands starting with 8, than one lousy, rotten 16.
But that's as far as the 'common wisdom' may seem to make sense. When the dealer's got a scare card showing-any nine, ten, or ace-why on earth would I want to split my 8s? Sure, I know a 16 still looks like a loser. But two hands starting with 8 each against these scare cards just looks like two losers.
Or, so it seems…
In Beat the Dealer, Ed Thorp says that one of the hands that convinced the pit bosses that he was a complete fool back when he first hit Las Vegas as a blackjack card counter back in 1960 was a pair of eights. As per his computer analysis, he always split them. Before computers came along, it was not common wisdom to always split 8s. Is there an understandable logic behind this basic strategy play?
As a matter of fact, there is.
What if, instead of splitting 8s, casinos allowed us to 'toss' one eight whenever we were dealt a pair, and take our chances instead with whatever card the dealer dealt us to replace it?
That's a no-brainer. A total of 8 isn't nearly so bad a start on a blackjack hand as a total of 16. With the 8, you have a pretty decent chance of drawing a ten for an 18 total. And although I'm not exactly thrilled with the idea of pitting my 18 against the dealer's ten up I sure do like it better than a 16! And I might even draw an ace, 2, or 3 on my 8, giving me a chance at a much stronger hand than 16.
It's not hard to see that a hand of 8 is a whole lot better than a 16 against a dealer ten. The 8 still looks like a loser, but nowhere near as bad of a loser. If I could toss one 8, I'd do it in a heartbeat. But casinos don't give me the toss option.
The option they do give me--splitting--seems bad because I've got to put more money on the table on a loser. Whether or not two hands of 8 each is better than one hand of 16 is really a question of which option loses the least. And I can only answer that if I know exactly how much more a 16 total costs me--over time--than an 8 total. How do I figure that out?
In 1956, a small group of mathematicians (Baldwin, Cantey, Maisel, and McDermott--memorialized by blackjack pros ever since as 'The Four Horsemen') used old-fashioned adding machines to calculate the answer to this and every other blackjack basic strategy question by tediously running through the math of every possible outcome. Their conclusion: Split the 8s. Even with twice the money on the table, they found, you'll fare better than you would taking your chances with that lousy 16.
For example, if the player has a sixteen versus a ten, with a $10 bet on the table, in the long run he will lose, on average, 40 cents on the hand. If he has a pair of 8s and he splits the 8s, so that he has two $10 hands starting with a total of 8, on average he will lose 16 cents on each of these hands, for a total loss of 32 cents. If you play the 16 against a ten instead of splitting the 8s, the long run cost is 8 cents for every ten dollars starting bet.
Splitting 8s versus dealer high cards is a classic defensive play. We know we will lose money on the play, but less than we would otherwise have lost.
Unfortunately, few players of that time believed the The Four Horsemen. Then, in 1962, Ed Thorp ran the same hand through his IBM computer and, in a fraction of the time it took those mathematicians, confirmed their answer. That 16 total is so bad, that when you see two 8s, you should throw the extra bet out there to split them with only one thought in your head: Thank heavens that sixteen isn't composed of a 9 and a 7, or a ten and a 6! With two 8s, you still have a fighting chance.
So, painful as it is, you should always split those is. But if you ever find a casino that offers the 'toss' option, don't split, toss! You heard it here first. ♠